Admittedly, it’s quite a coincidence that Basti chose the Bamboo-Bike, of all things, as the means of transportation for his big adventure. On the other hand, his decision is nothing less than consequently right. When his plans of travelling the world were in the early stages of development, he was reading an article about Bamboo-Bikes. His great affinity to all wooden things and the idea of sustainability mainly influenced his decision to use a Bamboo-Bike.
With BAM Original, Basti found the perfect companions for his concept. The guys at BAM Original offer workshops for building Bamboo-Bikes. In one of these workshops at Ritzel Kitzel, a partner of BAM Original, Basti had the chance to build his bicycle frame, consisting of carbon, resin and naturally bamboo.
The mechanical characteristics of bamboo are partly similar to those of steel, but without any CO2 emissions in production. Carbon, which is supplied on coils, imparts stability on the junctions.
The resin is used to agglutinate the bamboo rods and to laminate the carbon sleeves.
56 % of epoxy resin is made from recycled raw materials. Before cutting the bamboo rods, one must decide on a geometrical shape for the bike frame, be it a racing bike, a mountain bike or something cozier, as it is in Bastis case, a touring bike. For him, his bamboo bike will have to compensate for accommodations, so besides being perfectly fitted to Basti’s needs, it has to have suspensions for several panniers.
Additionally, by adding some custom components the bike is given individual characteristics, such as a high gloss finish. 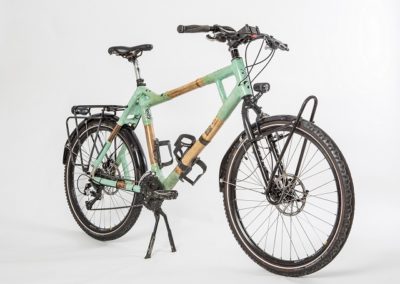 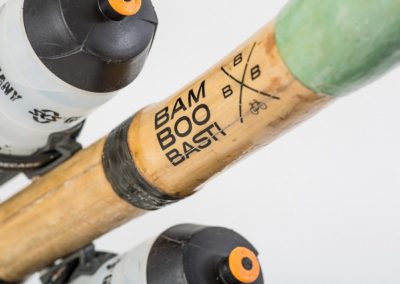 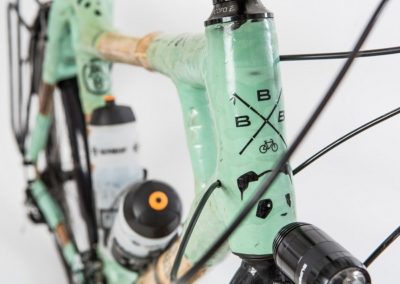 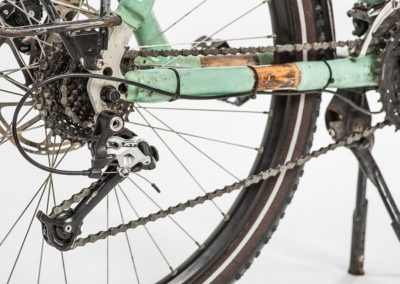